“The class clown tells jokes everyone gets while the class nerd tells jokes that only he gets.” – John Vorhaus in the Comic Toolbox

“The Comic Toolbox: How to Be Funny Even If You’re Not” is kind of a reference book for comedy script writers, written by John Vorhaus in 1994. The author, who is also known as the screenwriter of success series such as “Married… with Children,” is a rare example of someone who has dived into the foundations of humor, who is able to explain (and illustrate) how a joke actually works, and offers helpful suggestions for using it.

Personally, I find the subtitle a bit misleading, as the writer doesn’t force you at all to be funny. What he does, however, is provide a comprehensive and reproducible framework for creative thinking, character-building and storytelling.

Humor is subjective, but the principles underlying humor are not. And even if you’re not writing sitcoms of comic novels, there’s a lot of wisdom to find in this oeuvre. The techniques and exercises can bring value for any business speaker, technology presenter or corporate spokesperson ― they will teach you how to become the class clown instead of the class nerd. 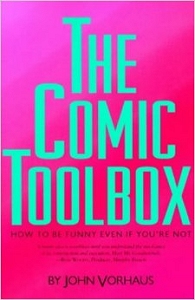 Let me share a few quotes I found interesting, and explore how they could be used in your daily life as a B2B storyteller…

The very first chapter is about truth and pain.

The example given by Vorhaus about airplane food is quite illustrative:

“When a stand-up comic makes a joke about bad airplane food, he’s mining a common vein of truth and pain. Everyone can relate. Even if you’ve never flown, you know airplane food’s, shall we say, ptomainic reputation. You get the joke.”

I have used this combination of truth and pain many times in my business presentations. If you introduce your audience to a painful situation or confront them with an uncomfortable problem (preferably one they have experienced themselves), they tend to be much more open to listening to the solution you’re going to present.

Another section I found extremely useful is the one in which the author maps the three classic types of conflict, man against nature, man against man, and man against self, onto comic situations. Let me focus only on the first one, which

The book illustrates the first case by “Back to the Future” protagonist Marty McFly (played by Michael J. Fox), and the second one by the personage of Michael Dorsey (portrayed by Dustin Hoffman) who becomes Dorothy Michaels in the movie “Tootsie.”

As a business or technology presenter, this global conflict is almost a natural state of conflict to exploit. Aren’t all your customers struggling with some small of big problems in their “comic” ―which is often also their real― world, when they come listening to your presentation? If you can manage to find their sweet (or sour) spot you’re probably off for an interesting dialogue.

A next paragraph (in chapter 12) I’d like to elaborate on is the following one:

“When dealing with story problems, you need to think in terms of two kinds of logic: plot logic and story logic. Plot logic is outer logic, the sequence of events that you, the writer, impose on your story. Story logic is the inner logic of your characters, the reasons they have for behaving the way they do. All of your story moves must satisfy both plot logic and story logic. In other words, your characters must do what they do to move the story forward, but their actions have to make sense to the characters themselves.”

Now, think of the plot logic as the structure of your talk, and of the story logic as the main concerns of your listeners. Your presentation must satisfy both too. In other words, your speech and your visuals must follow a plot that conveys your key messages, but the vocabulary and the tone of your content should be adapted to the needs and expectations of a specific audience.

There’s still a lot more in this book to reflect upon, that I may come back to it in a future post on this blog. In the mean time, you may go to your (online) book store, order the Comic Toolbox and look for my favorite quote on page 133:

“The best lines in comic writing do three truly marvelous things: They tell the story, tell the truth, and tell a joke, all at the same time.”

Wow! Isn’t this what all of us presenters and storytellers dream about at night?

If you don’t have time to read the book, you may also start by watching this video recording of a lecture given by John Vorhous at the Norwegian national television.

And here’s another inspirational movie to help you make it through your day. A proof that one can be a good presenter and be funny at the same time. Watch this “Life after Death by PowerPoint” video by American comedian Don McMillan. I wonder if he has been reading the same book as I did…

You may also read this other article:

Although one always has to be cautious when using humor in presentations (read my “monkey see, monkey do” post  for an example on how not to do it), a well-chosen joke can be good to (re)gain the audience’s attention and a cartoon is sometimes a welcome alternative for boring stock clip art.

One of my favorite resources to tap from for business presentations is of course Dilbert, a recognizable stereotype for tech-company employees (that often happen to be in the audiences I present to…). Also Randy Glasbergen offers a large catalog of great cartoons.

I am also lucky to have a professional cartoonist among my friends, that once created a few exclusive drawings for one of my conference talks. The full slide show is available on SlideShare, but telecom industry outsiders may need some explanation about the dialogs below.

As my presentation addressed the evolution of telecommunications services from traditional voice telephony to text messaging, video and multimedia, I first showed a takeoff on Alexander Graham Bell, who once invented the first telephone.

As early as in 1876, Thomas Watson, assistant to Alexander Graham Bell, had the dubious honor of being the first worker ever summoned by his boss via the phone. Through the famous words “Mr. Watson, come here.” Can you imagine this same scene more than 130 years later, when voice communication has (partly) been taken over by video? (note that I created the original presentation for an industry event in 2009, and that the 2013 Mr. Watson would probably show up on a mobile device rather than on a PC screen.)

The last part of my talk was addressing a roadmap for the replacement of old telephony (also known as the Public Switched Telephone Network or PSTN) by next-generation multimedia services, offered through an IP Multimedia Subsystem (IMS). An operation that takes time (actually, this migration is still going on today), and assumes a temporary cohabitation of the old and the new communications infrastructure and services (as shown in the 3rd cartoon, with sincere apologies to my mother-in-law.) 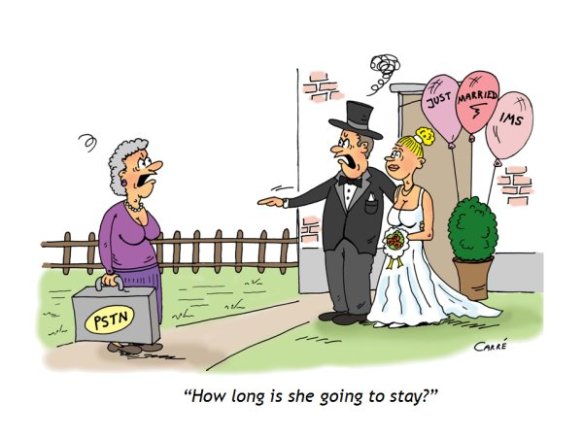 As a final note, never forget to mention the cartoonist and acknowledge his copyrights. My sincere thanks to Carré Cartoons, and keep up the good work!

Other articles about Alexander Graham Bell and Thomas Watson:

Once upon a time, when George W. Bush was president of the US, I attended a business presentation about a product of which I even don’t remember the name or the functionality. What I do remember though was the presenter’s opening. Only a few weeks ago I wrote in my “begin the beginning” post that the first seconds of a presentation should intrigue, surprise or provoke. And this American speaker truly managed to hit all three targets…

In those days, there was a funny picture circulating the internet (social media were yet to be discovered by the big mass) with a canvas of photos showing President Bush juxtaposed to a series of chimpanzees that were mimicking the president’s facial expressions (or was it the other way around?).

As our speaker projected this (in)famous image as a visual to introduce himself, his company and his country of origin, it was no surprise that a few days later me and my colleagues got a “we sincerely apologize for this content” email in our inbox. Accompanied by a kind –but firm– request to dispose of the PowerPoint handout we were given at the end of the talk.

Here’s the moral of yet another true story: always be cautious with using humor in your presentations and try to be (literally and figuratively) politically correct. Keep in mind that ‘funny’ is not the same for everyone and that different people may appreciate your jokes differently (or even take them as an offence).