On Monday, I woke up with a sound bite from Oprah Winfrey on my clock radio. An excerpt of her acceptance address for the Cecil B. DeMille Award for outstanding contributions to entertainment at the 2018 Golden Globes awards ceremony, which will most likely be known in history as her #MeToo speech. I must admit I wasn’t at full consciousness that early in the day yet, but WOW! what an amazing storyteller Oprah is, and what a memorable performance she delivered. Some commentators even called her discourse presidential. Just watch the video at the bottom of this page. 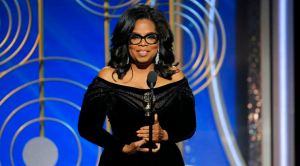 In the past, I have published posts about Barack Obama’s second term acceptance speech (“Obama and the rule of three”) and about Donald Trump’s communication capabilities (“Trump and the rule of one”,) so why not write a few words about this presentation of a still-very-maybe next president of the USA.

As you may have observed, Oprah’s speech is loaded with ethos, pathos and logos. Using a good mix of Aristotle’s persuasive appeals, the media diva succeeded in winning the hearts and the minds of millions of women and men sitting in the auditorium or in front of their TV screens (for more background on ethos, pathos and logos, you may read my article “About rhetoric, storytelling, and persuasion”.)

Of course, the current scandals in the entertainment industry, misogynist power relations, and sexual misbehavior are a more than ethically loaded topic. Dressed in all-black – emphasizing her support for the #metoo movement – Winfrey took on the predators and paid honor to their victims.

“Tonight, I want to express gratitude to all the women who have endured years of abuse and assault because they, like my mother, had children to feed and bills to pay and dreams to pursue. They’re the women whose names we’ll never know. They are domestic workers and farm workers. They are working in factories and they work in restaurants and they’re in academia and engineering and medicine and science. They’re part of the world of tech and politics and business. They’re our athletes in the Olympics and they’re our soldiers in the military.”

“[Recy Taylor] lived, as we all have lived, too many years in a culture broken by brutally powerful men. For too long, women have not been heard or believed if they dared to speak their truth to the power of those men.”

But she also bravely expressed her support for the free press, that is currently under attack by alternative facts and fake news allegations.

“I want to thank the Hollywood Foreign Press Association, because we all know the press is under siege these days. But we also know it’s the insatiable dedication to uncovering the absolute truth that keeps us from turning a blind eye to corruption and to injustice, to tyrants and victims, and secrets and lies. I want to say that I value the press more than ever before as we try to navigate these complicated times, which brings me to this: what I know for sure is that speaking your truth is the most powerful tool we all have.”

Oprah’s presentation was loaded with stories, inspired by the entertainment industry and by the lives of fellow African-Americans.

“Each of us in this room are celebrated because of the stories that we tell, and this year, we became the story .”

During a no longer than 9-minute performance on stage, she brought three personal, emotional, and engaging stories. The opening about herself, the little girl on the linoleum floor who’s watching Sidney Poitier becoming the first black Oscar winner. Her testimonial about Recy Taylor, who was abducted, gang-raped, and left blindfolded by the side of the road coming home from church. And the story of Rosa Parks, the lead investigator on the Taylor case, who refused to give up her bus seat to a white passenger.

Although you won’t find many hard facts and figures in the transcript of Winfrey’s speech, be sure that every single man or woman in the audience was linking her words to the scandals that recently unfolded in Hollywood. So, logos was all around. In stories about gender, racial, and income inequality. And, not at least in the character of the narrator: women, colored, and of poor origin.

“And I have tried many, many, many times to explain what a moment like that means to a little girl, a kid watching from the cheap seats as my mom came through the door bone tired from cleaning other people’s houses.”

“In 1982, Sidney received the Cecil B. DeMille award right here at the Golden Globes and it is not lost on me that at this moment, there are some little girls watching as I become the first black woman to be given this same award.”

“… the incredible men and women who’ve inspired me, who’ve challenged me, who’ve sustained me and made my journey to this stage possible. Dennis Swanson who took a chance on me for A.M. Chicago. Quincy Jones who saw me on that show and said to Steven Spielberg, ‘Yes, she is Sophia in The Color Purple.’ Gayle, who’s been the definition of what a friend is and Stedman, who’s been my rock.”

Finally, the epic “their time is up” theme – probably as memorable as Obama’s “yes we can,” – combined with a strong ending gives a message of hope to the abuse victims, and to all magnificent women and some pretty phenomenal men in the world.

“So, I want all the girls watching here and now to know that a new day is on the horizon! And when that new day finally dawns, it will be because of a lot of magnificent women, many of whom are right here in this room tonight, and some pretty phenomenal men, fighting hard to make sure that they become the leaders who take us to the time when nobody ever has to say ‘me too’ again.”