Today, exactly 10 years ago, Apple introduced the iPhone. During his keynote presentation at Macworld Expo in San Francisco, the late Steve Jobs told the audience that:

For the thousands of people in the auditorium, as well as for the crowd of technology enthusiasts like me that followed the event via a live blog, this was certainly a wow! moment. 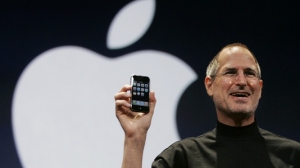 This was one of these points in time when you recognize that a product or service is a must have that might change your life. Something powerful enough to make one say: “Wow! I’ve never seen (or heard) something like this in my whole life.” Or, like Jobs had perfectly described this moment a few seconds earlier in his speech:

Every once in a while, a revolutionary product comes along that changes everything. And Apple has been – well, first of all, one’s very fortunate if you get to work on just one of these in your career.
Apple’s been very fortunate. It’s been able to introduce a few of these into the world.
In 1984, we introduced the Macintosh. It didn’t just change Apple, it changed the whole computer industry.
In 2001, we introduced the first iPod, and… it didn’t just – it didn’t just change the way we all listen to music, it changed the entire music industry.

So, as a product marketer and a public speaker, what can you learn from the January 9th, 2007 iPhone announcement? besides that the iPhone was – and still is – a great disruptive product. Here are a few tips on how to turn a new product introduction into a memorable wow! moment:

Sometimes a wow! moment just comes spontaneously (or even unexpectedly.) But if you want to make sure you don’t miss the opportunity to wow! your audience, then you’d better plan, script and rehearse your presentation well in advance.