Some storytellers deserve a statue. As a matter of fact, there are actually a few of them who already got one – although erected posthumously. If you visit Copenhagen, you can meet the bronze Hans Christian Andersen, and in Anaheim, California, there’s a “Storyteller Statue” showing the young Walt Disney with his creation Mickey Mouse.

Although my children have grown too big for watching Disney movies (at least they think they have) I still can’t get enough of savoring his 1940 animated feature Fantasia. And within the movie, which is (for the few who don’t know this masterpiece) a compilation of animated interpretations of classical music pieces, the well-known fragment of the Sorcerer’s Apprentice is certainly my personal favorite.

Supported by the music of French composer Paul Dukas, and conducted by Leopold Stokowski, the sequence features Mickey Mouse as an aspiring magician who borrows his master’s enchanted hat, and then finds out that the magic is a little too strong to handle… (you may watch the video here.) 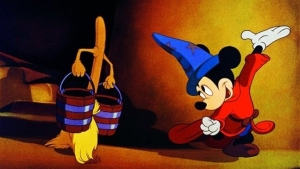 The Sorcerer’s Apprentice exposes Walt Disney as the master-storyteller we know, able to deliver a story that appeals to all audiences. A story that brings an animated character alive, as if it were a real person. A story that is timeless and has survived (and will survive) long after it was first told. A story with a beginning, a middle and an end, but without room for distraction or boredom. A story without words, that is a symphony of sound and vision. A story full of emotion, humor and heart.

There’s so much we can learn from the great magician Walt Disney, and… aren’t we all a little like apprentice sorcerers ourselves?

2 thoughts on “The sorcerer’s apprentice”